Tracing pentagrams in the air is a practice originally popularised by the Golden Dawn, and widespread today throughout the myriad occult traditions.

The pentagram as used by the G∴D∴ had one point upwards, and associated each point with one of the four elements, and the fifth element, 'spirit'. 'Invoking' and 'banishing' pentagrams could be drawn for each element by changing the point from which the tracing commenced.
Now, first of all, the notion that the pentagram drawn with one point upwards is somehow good, and the pentagram drawn with one point downwards evil, or (gasp) downright Satanic, is fairly modern, probably going back no further than the 19th century. It is based largely on the notion that spirit ought to be above the materialistic elements. Which to me seems like a very subjective point of view, or just plain gobbledegook.
Once you 'dare' look at the inverted pentagram without prejudice, there is a lot of potential new symbolism to be seen. One of the first things I realised was that it's kinda like a tree, the downward point representing the trunk, and the other points branches. This alone already held some appeal to me, having a fondness for nature. But it was followed by another revelation, which was to change my whole approach to the symbol: the pentagram in this form fits very nicely on the Tree of Life.
This is how I picture it: The two topmost points are appointed to Chesed and Geburah, the centre to Tiphareth, the next two points to Netzach and Hod, and the lowest point to Yesod. Imagined like this the pentagram becomes a symbol for the entire Tree of Life, or the portion of it beneath the Abyss (one could imagine the supernal sephiroth as stars above the 'tree' formed by the pentagram, if one wishes). Which, in my mind at least, translates to a symbol of the entire universe.
This reinterpretation of the symbolism of the pentagram has more or less replaced the G∴D∴ version in my practise (namely in the Lesser Ritual of the Pentagram, or its variants). I feel it most natural to begin tracing from the lowest point, proceeding anticlockwise. I don't feel it necessary to use many variants. The fact that not all sephiroth are represented as points would hamper this somewhat, anyway. It wouldn't be very difficult to associate elements with the points (I'd go with Chesed - earth, Geburah - fire, Netzach - water and Hod - air), but I feel the energy of this symbol is different, more all-encompassing, if you will, to be used for merely one element. 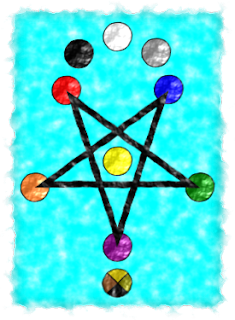